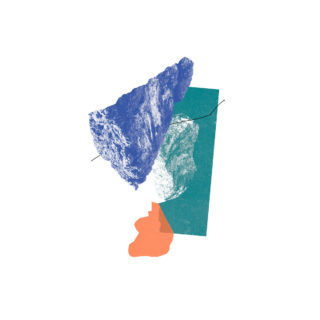 At first glance, there might not be much that separates r beny – the moniker of Bay Area modular artist Austin Cairns – from many Bandcamp electronic poseurs: his stage name is taken from an acclaimed (but not too acclaimed) Canadian photographer, his self-penned biography dovetails into the descriptive non-entities of music critics’ Room 101 (“music made of light and fog”), capital letters are nowhere to be seen and his album artwork – predating his deal with Belgian label Dauw – decorates the Oregon coastline in 35mm grain. We’re one song called ‘murmuration’ away from handing in our ambient bingo scorecards to the front with dozy eyes and a second-hand bucket hat.

His new 38-track retrospective tells a more interesting story, though. Gathering the spools of previously sold-out cassette runs, Seafoam & Dust collects an unusual opportunity for reflection across four albums that have been hard to find in their original formats, but have maintained a quiet influence on the trajectory of ambient music, and cemented r beny’s status as an underground phenomenon. Really, it’s a nice excuse to be bowled away again. Ian Hawgood’s remasters sound more crisp and vibrant than the lo-fi-by-nature originals, with Cairns’s modular melodic tendencies trickling deeper, from the aching drones of ‘Palo Colorado’ to the murmured abstractions of ‘The Sea’s Sullen Green’ and textural wash of closing track ‘Glowing Dawn, Across The River’.

Over more than three hours of music, Seafoam & Dust becomes a transportational listen, that – like the best ambient music – augments its surroundings with playful interaction, begging to be interrupted. The mood doesn’t fluctuate so much as its persists. It’s (very literally) nothing that we haven’t heard before, but open a window and these tracks could share a world with Emily A. Sprague’s Mount Vision or Green-House’s Six Songs for Invisible Gardens; the laughs from the neighbours’ illegal barbecue gently seep into the record’s ecosystem with birdsong and the uncanny ease of electronica that sounds analog, earth-grown and leaves you completely at ease.