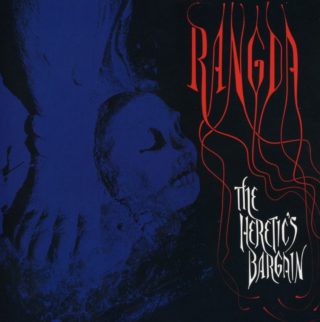 Psychedelia and dark, wicked folklore have always found a special connection in musical ventures. Rangda is no exception: a supergroup comprising fellow Drag City signees Ben Chasny, Sir Richard Bishop and Cris Corsano, who have borrowed their group name from a Balinese demon queen, like a composite creature born from the inner depths of guitar picking. Though its structure remains pretty much the same as Rangda’s first album – just a few long, instrumental guitar and percussions jams – ‘The Heretic’s Bargain’, released after four years of silence, takes the band a step further from what they were, with a fuller and more consistent sound, extremely fascinating in its lighter and wider psych approach that now includes a mix of world-folk and does away with vacuous virtuosity.

Obscurity is not forgotten though, and ‘Hard Times Befall The Door-to-Door Glass Shard Salesman’ sees Rangda’s noisier experimental side resurface, reaching the top of the exotic sensorial trip of the record. An exploration worth embarking on for all the weird psych lovers.