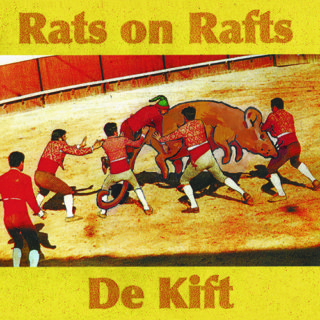 This collaboration between the psychedelic Rats On Rafts and brass nonet De Kift, two titans of the Netherlands’ punk scene, is certainly one of 2016’s more singular releases. Recorded in a month, and devoid of any digital equipment, it never quite settles on a style or a language. ‘Voorbij’ and ‘Swan Song’ could both pass for something off British Sea Power’s ‘Sea of Brass’ LP, at least until De Kift drummer Wim Ter Welle takes up vocal duties by speaking, loudly and passionately, in Dutch.

The self-titled collaboration doesn’t present itself as an easy listen, and De Kift’s atonal brass stabs aren’t always welcome. At its worst, the album sounds like a poor man’s Gogol Bordello, or Alex Kapranos’s old cocktail pranksters The Karelia.

Yet unexpected detours like the dramatic Americana of ‘Dit Schip’, which deftly segues into the breakneck Krautrock of ‘Powder Monkey’, show that more craft went into this collaboration than its sonic insanity initially suggests. Less an outright curiosity than a surprising, if patchy, triumph.