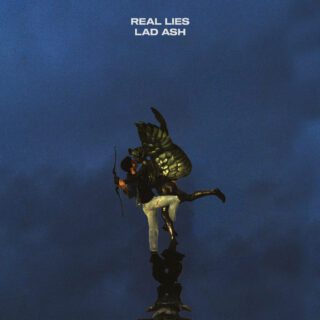 Lad Ash, the new endeavour by the London-based duo Real Lies, is an adrenalised lament, unearthing stories through Kevin Lee Kharas’ intimate lyrics, Patrick King’s afterparty electronics, and their collective hedonism. Unlike their debut release, Lad Ash seems to be cutting ties with the city they were once in love with; a sustained period in the doldrums, the loss of a friend in mysterious circumstances, and a love affair are only some of the anecdotes being painted on this new sonic portrait, one that subtly but effectively expands the sombre aesthetics of Real Lies.

Undoubtedly, the 12-track album depicts life in a rain-lashed London in what we could call an elegiac way. Via melodic, reverb-heavy anthems, a nocturnal drama gets bigger and lonelier by the minute, with blurry characters emerging from perplexed memories at the witching hour. As the luminous sounds progressively make their way to the centre of the dancefloor on a track like ‘Your Guiding Hand’, the key pieces of the emotional jigsaw that is Lad Ash gradually loom out of the club fog, making way for clarity, self-reflection, and euphoria.