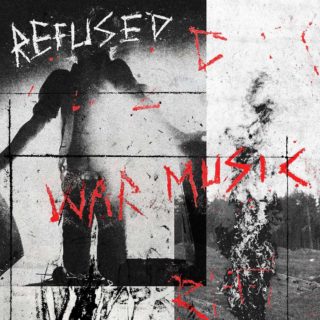 I don’t know if you’ve noticed, but the world feels a bit fucked right now. I mean, even parts of Sweden; quiet, liberty-loving Sweden, has lurched towards the far right in the past couple of years. And if it can happen there, it can pretty much happen anywhere.

Responding to this state of affairs, we’ve been inundated with politically-charged records recently. But only Refused, a band that has always managed to bring a touch of the Baader-Meinhof to Sweden’s hardcore scene have made an album that feels like a step-by-step instruction manual to fighting back.

War Music could be the most apt album title of 2019. Every song on this thing is basically about smashing shit up. The band have even turned their hammers on their previous record, replacing the pop and dance pretensions of 2015’s Freedom with good, old fashioned metallic hardcore. In fact, this record is so old school in places that I found myself checking the sleeve to make sure that ‘Malfire’ wasn’t a rehashing of 1998’s ‘New Noise.’

It’s not just the sound that recalls the late nineties; War Music’s politics are as much of a throwback to twenty years ago as the heavily distorted guitars. It’s all left me feeling a bit conflicted if I’m being honest. Once upon a time, I’d be all for turning the tables on the capitalist pigs, but the last two decades has tempered my revolutionary zeal, and this kind of simplistic, black and white messaging just seems a bit outmoded when faced with a world filled fake news and dog whistle politics. I mean, if the pointed wit of Tom Morello and Zac de la Rocha couldn’t stop Bush’s tanks rolling into Iraq, then I’m not sure if Refused’s rabble-rousing calls for a “cleaning of the slate” will halt the resurgence of Europe’s neo-right.

Refused are right when they call for more action and fewer words, but we also need a vision of something new rather than the politics of the 1960s.