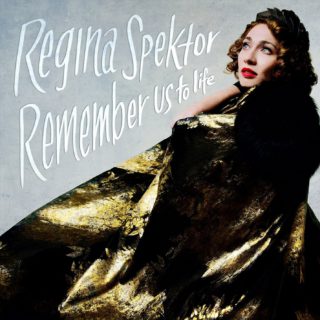 I don’t know about you, but I am totally over kitschy rhyming lyrics dressed up as musical philosophy. Unfortunately for Regina Spektor, that means that half the songs on her ‘Remember Us To Life’ album were going to annoy me before I even heard them. I’m sorry, but I just can’t see the wit or poetry in lines like, “they can either wake up or go deeper/but it’s so dangerous to wake a deep sleeper” (an irritating refrain from the track ‘Small Bill$’). It’s lazy, paint-by-numbers song writing, even when you’re doing it for irony, which I don’t think Spektor is.

That being said, this isn’t a terrible record. It’s an inoffensive mix of ballady, story-like songs that occasionally get weirdly intense (see, for example, ‘The Trapper and the Furrier’). It’s music that sounds like something you once heard before, in sixth form, possibly through a garden window at the winding-down stages of a house party, passing a joint back and forth with your introverted stoner mates, a brief lapse of attention enabling one of their hippy girlfriends to take control of the record player. But no one really minded.