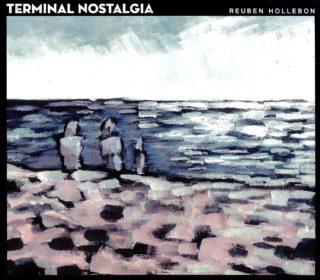 Besides working as a sound engineer and producer for many different acts, including Basement Jaxx, Reuben Hollebon has been working for a long time on his own music, which gave birth to his debut EP, ‘Clutch’. Four years on, the Norfolk-born, London-based musician is releasing his first LP. Largely informed by Radiohead and The National, Hollebon mixes songwriting with electronica, self-producing the majority of the tracks here and working with a four-piece band in a studio that he uses as an additional instrument in itself.

‘Terminal Nostalgia’ features powerful anthems – like ‘Faces’ – while ‘Augustus’ is an interesting winter folk song, melding acoustic fingerpicking with electronica, à la Bon Iver. The songwriting and arrangements are strong and well balanced, but Hollebon’s peculiar trembling voice, reminiscent of Keaton Henson’s, is often out of control and a bit over the top. ‘Come Back Early’ is a big flaw on that front, but otherwise ‘Terminal Nostalgia’ is a pretty interesting record with more to discover.