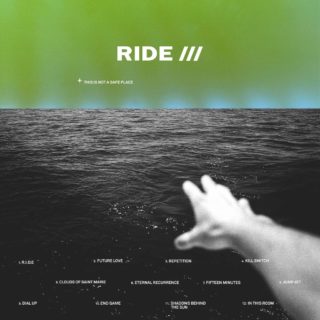 Although Wikipedia will tell you that this is Ride’s sixth LP, the resurrected shoegazers could be forgiven for fearing a bout of difficult-second-album syndrome on This Is Not A Safe Place: after all, 2017’s Weather Diaries, their first album in 21 years, managed to reanimate the band with impressively little nostalgia, feeling more like a debut than a revival, and creating more anticipation for its follow-up than the average record from an old band on the cash-in comeback trail.

Happily, some of …Safe Place rises to the challenge: lead single ‘Future Love’ pairs a gorgeously wistful melody with the sort of yearning, chiming guitar line that Johnny Marr will be annoyed he never wrote, and ‘Shadows Behind the Sun’, essentially a dressed-up solo singer-songwriter piece, understands how to marry the intimate with the monumental, treading that fine line deftly as the song builds. Even opening instrumental ‘R.I.D.E.’, where producer Erol Alkan’s fingerprints are most obvious, has a satisfyingly steely grit to it, buzzsaw bass and noisy percussion underpinning the dreamy swirls up top.

Much of the rest, though, falls prey to the law of the difficult second album, where the songwriting feels rushed, unloved or unexamined, and the lyrics spectacularly trite (“This was your 15 minutes / Hope you had fun now / Have a nice life now / You’re basically done now” goes ‘15 Minutes’s botched attempt at skewering celebrity culture). There’s a relentless (and rather predictable) push, too, for every track to be Incredibly Epic, regardless of whether it actually suits the song, and such a drive for scale over detail grows tiring by half way in: the size and appetite of Ride’s live audiences suggests otherwise, but there’s only so much incessant grandiose treacly guitar plod you can consume over the course of 51 minutes.

And so it is that the old adage of bands having 18 years to write their first album and 18 months to write their second has found its way of applying, after a fashion, to Ride’s fifth and sixth: where Weather Diaries was a labour of love, its follow-up is largely uninspired, an opportunity squandered for the band to recapture what was so exciting about them first time around. There are sparkling peaks on ‘This Is Not A Safe Place’, for sure, but between them there’s just far too much hard slog.