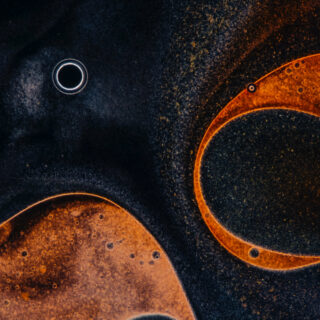 German-American composer Robot Koch’s 2018 multimedia project Sphere toured planetariums on both sides of the Atlantic and it would appear that he has become addicted to the gasps and the wide-eyed wonder. This new release, comprising seven re-worked tracks from his 2020 album The Next Billion Years, is an exercise in abstract minimalism, part of his new ambient project Foam and Sand.

Koch, who has also worked on the scores for shows including The Blacklist and How to Get Away with Murder, is a daily meditator and listening to this record, you will be too. ‘Nebula’ and ‘Stars as Eyes’ directly channel the same enchantment that defined Sphere; where the hushed awe of the 2020 original version of the latter track gave way gradually to the gentlest tide of muffled beats and soft-edged woodwind, this re-working smooths over even the loosest of rhythms, and if anything, the wonder only swells more capaciously as a result. There is a sense of nature at play when true ambience is embraced – organic growth does not happen to a timed pattern, after all, and that’s why it can appear so magical. It does not even need to be perceptible, and with tracks like these, Koch shows us that a piece of music can develop so peacefully that we could easily miss the changes entirely.

Tape recordings of slowed-down pianos fill many of the tracks, while on ‘Liquid’, bare strings left over from the original track are retextured and contemplative, asking questions of what the listener has on their mind. There is little guidance offered: we the audience decide where this music takes us. On ‘Post String Theory’, that place might be advanced considerations of the quantum mechanics of the title, but for the rest of us at the back, we can rejoice in the majestic, apparent simplicity of what we hear. If you listen to that piece and don’t start making preposterous, flowing arm arabesques, we suggest you try again. ‘Dragonfly’, by contrast, is, in the context of this record, something of a high-speed car chase, climaxing with an approximation of a garden blossoming into springtime life, darting with fresh excitement, wings fluttering and water rippling. This is an album of restorative, quiet revelation, for those of us that could use an escape hatch from real life every now and then.