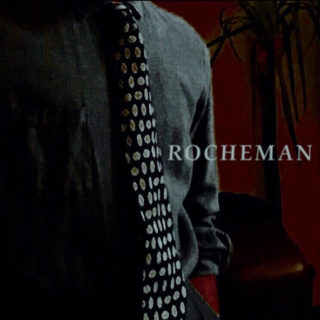 Enigmatic London musician and sound designer Rocheman has an arid scent of a decaying sophisti-pop star about him, like Paul Buchanan of The Blue Nile nursing his hangover after a big night out, or a rotting Prefab Sprout. His five years in the making his eponymous debut is a bleak document of once-lively sounds, gasping for breath, neck-deep in a marsh of tape hiss – and a cheerily detailed account of each failing organ.

‘Pestle Pusher’ and ‘Stay Here’ wheeze dying breaths. ‘Parades I and II’ can barely hold itself together on collapsing limb percussion. ‘Old Sign’ is a perfectly serviceable indie pop tune for the first 3 minutes before descending into a frosty waltz. ‘Mottled’ is just as its title suggests; a malignant pop song with bouts of health and wincing pain in its melody line.

‘Rocheman’ is full of songs that begin at the point of exhaustion; their Sisyphean nightmare dictates that they must continue regardless, as if sadistic Fates alone decide when they’re to rest.

Despite his Scott Walker chanteur baritone, Rocheman seems to be yet another singer-who-doesn’t-really-like-singing, preferring to slip by unnoticed. That is, until album closer ‘Mira’ finds him marginally louder in the mix, the swamp of tape noise miraculously drained. “Not that it matters”, he croons.