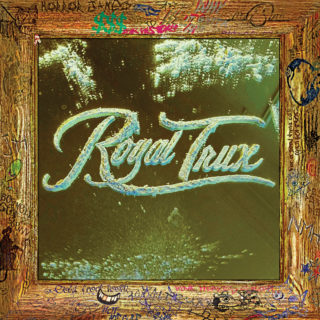 While it was unlikely that this would rank with the best of their large back catalogue (one that aspires to the wild and garage-y range of The Fall or GBV), this comeback album for Royal Trux is a relative success. No notes of apology or concession from Neil Hagerty and Jennifer Herrema as they push their most dependable and familiar tropes: slouching grubby riffs, beats marked by the late ’80s indie obsession with hip hop, deadpan ironical gesturing and an over-proliferating rash of sounds and ideas that constantly threatens a sense of line or momentum.

Even their return, more of a slide into playing again, was typically give-a-fuck. Their first release of ‘Royal Trux 2.0’ – as Kool Keith has it on ‘Get Used to This’, over a sample of ‘I’m Ready’ from 1998’s ‘Accelerator’ – is a pastiche of bloated sell-out rock album that’s both ridiculous and loveable.

Contrast ‘White Stuff’ to recent efforts by weirdo American indie rock peers Pixies and there’s no contest. The latters’ early ’90s sound is evoked on the opener here – so is Kiss – in a flippant dumbass pageant to narcotised grandiosity and tour antics. ‘Year Of The Dog’ and ‘Whopper Dave’ bring more stupid fun, ‘Suburban Junkie Lady’ suggests a sequel for an earlier character in the sleazy motel universe of their songs and, with the two-part ‘Purple Audacity’, cut-and-paste acid rock and a skewed funk groove on the penultimate cut, they point towards the kind of genius that lit up ‘Twin Infinitives’.

Neil Hagerty and Jennifer Herrema don’t suffer from the combination of timidity and laziness that gave us ‘Indie Cindy’. A personal split and a thirteen year drift has left both with reputable output apart rather than draining their creative partnership. It’s still surprising this works: when they last played Manchester in 2017 they seemed to be having trouble standing up.