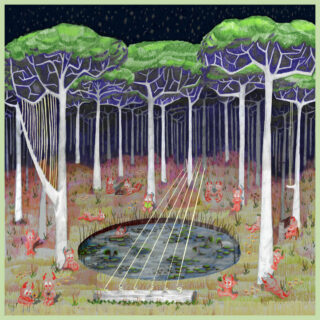 London band Deathcrash released their debut album Return this January, and already it feels like a real classic of the genre. Pastoral post-rock led by the twin guitars of frontman Tiernan Banks and lead guitarist Matt Weinberger, Return boasted spiralling melodies – pretty and intricate in isolation – that became heavy and marauding within the context of the quartet’s hefty, grandiose crescendos.

But what if we could really pull the beauty of those guitar parts to the fore? If we could focus on the complex fingerpicking rather than witnessing it as part of the whole? We get a taste of that on the Smog-like ‘Matt’s Song’, a bare-boned, beautiful acoustic number, that is one of Return’s tenderest moments, but perhaps after the dust has settled on Deathcrash’s ecstatic debut it does leave one wanting more of ‘Matt’s Songs’ as a bit of a palate cleanser.

Luckily, Satan Club is just that. Here, Weinberger strikes out solo, laying down seven instrumental compositions on his acoustic guitar with occasional help from collaborating friends. As the illustrated cover art perhaps implies, Weinberger’s compositions focus on the beauty of the instrument, an Americana-kissed celebration of melody, enchanting and intricate in their songcraft and intimate in their delivery.

Across Satan Club, the guitarist puts into practice the notion that nothing is more dreamy, more compelling, evocative of strong feelings, than slow-moving, pretty acoustic melodies laid bare, and it’s very difficult to listen along and disagree, as each track has a rare feeling of spaciousness that just allows the melody to breathe.

Indeed, Weinberger draws from Jim O’Rourke and John Fahey to transpose the American folk aesthetics of the Midwest onto his own neighbourhood Rotherhithe, in London’s Docklands area. ‘Redriff’, the fourth track on the album, is named in homage to the historic name for the area, and is a sweeping, nostalgia-inducing composition that sees the guitarist returning again and again to the most delicate of ascending melodies.

Elsewhere on Satan Club, there is total focus on the hypnotic quality that can come with repetitive finger-picked acoustic melodies. ‘Buck’ is the album’s high point, though, a real sprawl that combines Weinberger’s gorgeous playing with the heavensent harp melodies of collaborator Aga Ujma. ‘Dustbowl’, the slowest track of all, features reverb-laden piano to usher in the end credits, whilst ‘Worm’ is a coarse moment – peak Americana – wherein Weinberger’s notes sound like they’re conspiring against each other. Satan Club is a gorgeous little record, an accomplished solo effort by a great guitarist on which the devil is in the detail.