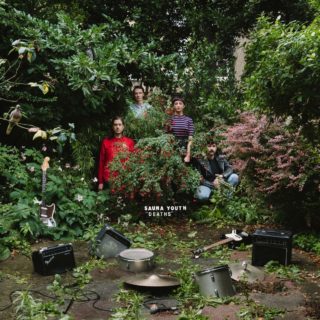 Quite simply, ‘Deaths’ is a satisfying end to Sauna Youth’s highly energised triptych. Beginning with debut LP ‘Dreamlands’ in 2012, and the stellar ‘Distractions’ three years later, the group have forged themselves a legacy with intense indie-pop. Their flagship has been two-minute battlecries, the whole group barking the lyrics in unison. A band that always come at you.

In some respects ‘Deaths’ treads the same paths laid by ‘Distractions’. Despite coming three years later, it bristles with a greater sense of youth; look deep into this record and it will stare back at you, wild-eyed.

The album was shaped by deadlines – studio booked before the first song was written – and that feeling of urgency is evident throughout. But it’s not rushed. It’s not a “that’ll do” album. It simply sounds spontaneous and lively, more so with every play. The “ssss”, potentially a sample of spray paint in action, that nestles alongside the licks of ‘Percentages’ sounds like the catharsis of urban claustrophobia, whilst the relentless guitar skronk on ‘Leisure Time’ channels the frustration of working oh-so-hard making music during your only free time.

However, the best moment on ‘Deaths’ comes when the band break away from the formula –  ‘Swerve’ – where rock intensity subsides for a noise-rock soundscape, as vocalist Ecke coldly delivers a monologue from a recent piece of writing. Sauna Youth are one of few guitar groups who make music for now, rock music riddled with current paranoia. On ‘Deaths’ this is continued in wonderful fashion.