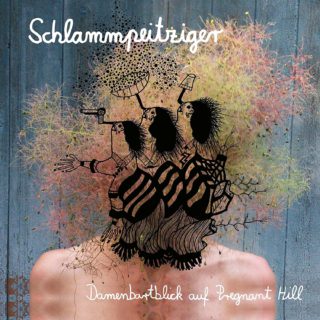 It’s tough to know where to start with Jo Zimmermann. Perhaps it’s with the fact he launched his solo career under the German word for ‘weatherfish’? Or his long-time devotion to creating music with a Casiotone? OR the probability of him delivering the line “Your farts smell like the breath of a rainbow unicorn / so sweet / and so soft” on an unsuspecting Tinder date like an even more Eurotrash Antoine de Caunes? On previous releases, there was a kind of music box clarity to his work with tracks like ‘Honkytonk Schlickummpittz’ ticking over with that tinny Casio click, but here, on album number eleven, trying to unravel Zimmermannn’s contrarian world is much more complex.

When he’s not ruminating on fart bouquets, and absent of his weirdly sleazy vocal, ‘Bock Bounceburg’ is fun and playful, ‘Smooth Motion Kaukraut’ has a satisfyingly melodic squelch and ‘Kandierte Jammerlochlappen’ sounds like the electronic interludes SFA spent most of their career weaponising to great effect. Ultimately, though, it makes for an album that’s definitively more weird than it is wonderful.