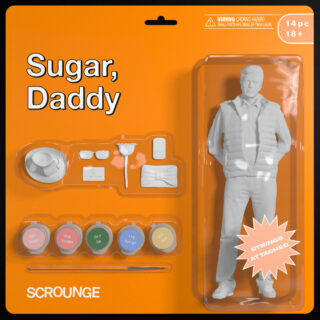 South-east London guitar/drums two-piece Scrounge have presented Sugar, Daddy as a “mini-album”, which, on a purely technical level, is absolutely right – its eight songs here fly by in 23 minutes. That positioning, however, does a crucial disservice to a record that has just as much urgency, energy and richness as anything twice its size, and its acute density – album-sized thrills compressed into a tight space like some cornered wild animal – makes it even more compelling, with a size-to-weight ratio that means violent explosions of noise hit harder, thunderclap drums rattle heavier, and Lucy Alexander’s stories of anger,  weariness and corporeal distress cut deeper.

That’s not to say, though, that Sugar, Daddy operates an aesthetic of bludgeoning intensity where every track is an assault weapon. Indeed, a minimalism underpins much of the record, where aggressively simple guitar riffs and almost techno-inspired drum patterns provide a clean, lean foundation from which the songs alternately build or burst. Accordingly, the seething ‘Nightstand’ establishes a world based on four notes, and ‘Badoom’ – the sound of ‘Feelgood Hit of the Summer’ if Josh Homme was an overworked primary school teacher – on barely one, with their respective mid-song detonations all the more powerful as a result.

Elsewhere, that same stark platform is used to create gorgeous textures that belie their two-piece status (album highlight ‘Starve’ sighs with a melancholia perfectly augmented by distant feedback aches) or knotty rhythmic kinks that belie their punk roots (the whiplashing micro-pauses on ‘Grid’). It all makes Sugar, Daddy an exhausting, exhausted, exhilarating and pugilistic sort of record, but also, excitingly, the sound of a band who are just getting started, full of delicious coiled-spring potential. If this is what a “mini” looks like to Scrounge, the prospect of a full album should terrify.