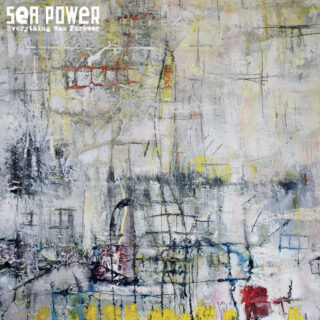 Veteran British rock sextet Sea Power (formerly known as British Sea Power) are a loosely defined type of band. And Everything Was Forever, their eighth album, is a time-slipping type of record.

The ten tracks here unfold, almost unbroken, with a dreamlike momentum, laced with Sea Power’s distinct blend of stadium-sized weird rock, a sound that feels every bit as much U2 as it does Siouxsie and The Banshees. Throughout, the album’s texture radiates a delightful porousness, with a sense that anything can suddenly become central. A backgrounded keyboard echo bursts into a vibrant neon solo (‘Folly’), an allusion to Robert Smith’s vocals becomes a near-tribute (‘Doppelganger’) and a marauding bassoon ends up stalking the entire album like a recurring dream.

The dream logic allows moments of abrupt recognition to seep through, such as in the gloomy post-punk of ‘Transmitter’, in which vocalist Yan admits that, “All of this used to mean so much to me / It doesn’t mean so much anymore” or in the bucolic ballad ‘Fear Eats The Soul’, in which it’s whispered “You know what I’m most afraid of? Finding out what I’m really made of”.

‘Two Fingers’ is the album at its dreamy best. The six-minute odyssey awakens countless times, startled like Kafka’s Gregor Samsa into new realities. However, whether it’s trading in ascendant post-rock guitars, dockland ambient, or rousing choruses, the song rides the wave. Like the name-checked Cthulhu [the fictional deity created by horror writer H.P. Lovecraft], ‘Two Fingers’ feels like it exists outside normal space-time.

Everything Was Forever is less an album, more a vessel: a surreally radio-friendly meditation to swim within.