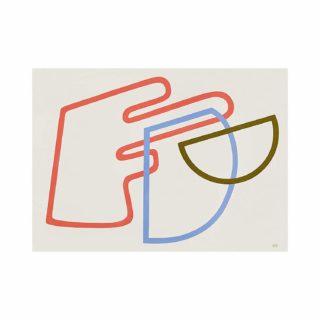 “Selling was made for fun, really as an excuse to get Derwin to come to my house and drink tea,” admits Jas Shaw, recalling the inception of his musical partnership with Derwin Dicker, aka Gold Panda. For Shaw, who usually writes as one half of Simian Mobile Disco, the collaborative process was perhaps less of a step into the unknown than for Dicker, who creates alone under his moniker.

Creative collaboration can be a tricky balancing act of deliberation and compromise, with the risk of one person surrendering something valuable in the process. It can also hit a sweet spot, painlessly unearthing rich seams of potential. Fortunately, ‘On Reflection’ falls firmly into the latter category.

At 41 minutes – just nine tracks – the album loses nothing in terms of emotional impact or textural scope despite its relative brevity. The immediate energy of ‘Qprism’ seems to open the album in the centre of the song, giddy and glistening, before burning out into ambient afterglow.

Still, there are no grand or overwrought moments weighing on the album’s centre of gravity. Most tracks settle on a groove or melodic intention and explore a range of timbral possibilities without disrupting the gentle rhythm they set for themselves. ‘Keeping Txme’ – undoubtedly the prettiest moment of the record – gently pushes on for almost five minutes as the same unfurling synth line ever so slightly changes its form.

The bulk of the album is built around these fractal, looping curlicues, with subtle shifts in the structure and saturation of the tracks keeping the ear constantly stimulated. ‘Dicker’s Dream’, the longest track at nearly nine minutes, develops slowly but assuredly, continually hinting at the possibility of euphoria but never quite reaching a tipping point. Even the most club-ready track, the hypnotic gush of ‘Mirror Can Only Lie’, never feels overblown.

It takes skill to craft tunes like these – tracks that are seemingly footloose, rich with rhythm, melody and texture but that are actually expertly restrained; ideas distilled and refined into their purest forms. It’s a calibre of musicianship that comes naturally when the main aim is to enjoy the process.