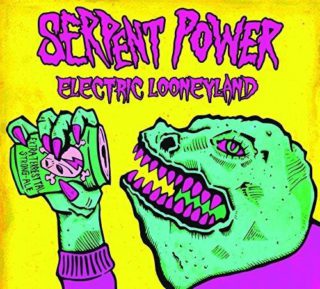 Pairing the mottled, neo-psychedelic talents of Ian Skelly of the Coral and Paul Molloy of The Zutons (and The Coral), Serpent Power is a project that “takes it cues from no-one, and is powered only by the twisted wheels of their own imagination.” A bold assertion and no mistake, but two years on from the duo’s 2015 eponymous debut, the lysergic-dappled, technicolor horror of ‘Electric Looneyland’ goes some distance to uphold such a claim.

While at a conceptual level their tongue is firmly lodged in cheek (the pair have said the record stemmed from “stumbling across a skip of mysterious keyboards, seemingly beamed in from a distant solar system”) the music stands on its own merits. From lead single and opening gambit ‘Golden Dawn’ – an ambitious traipse of fuzzed-out glam swagger – to the Motorik groove, Haight-Ashbury haze and interstellar Hawkwindian cosmosis of ‘Black Angel Rider’, ‘Electric Looneyland’ brims their joint knack for marrying snaking, dark melodies with slick, CSNY-leaning harmonies and an overarching tenor of cavalcading menace.

And while this brand of lysergic-dappled rock could very easily slot onto, say, the roster of L.A.’s Castle Face, there’s a distinctly British strain woven throughout this album, not least on the infernal Northern soul of ‘Witching Hour’. In a realm often steeped in mimicry, Skelly and Molloy have excavated some wonderful and genuinely progressive new territory.