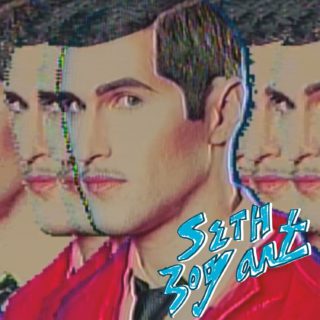 Seth Bogart’s debut album seems made for those with a predilection for the sophisticated electronic music of Broadcast et al, especially as the Hunx And His Punx singer cites the band as a primary influence. It’s the more playful side of electro – and Bogart’s affinity for ’80s French pop and Le Tigre – that’s most prominent here, though, and the record’s tongue-in-cheek tendency to forgo the more serious side of electronic music is inevitably divisive.

It’s Bogart’s rejection of boring earnestness that makes this album refreshing. Of course, it isn’t easy to like. Its primitive, child-like beats veer from pleasingly Kraftwerkian to discordantly out-dated, and ‘Flurt’ has a knowingly irritating discourse on lust where Bogart’s vocals are obscured using a vocoder. He prevails when he negates all the gimmicks (‘Forgotten Fantazy’), and Kathleen Hanna’s vocal contribution on ‘Eating Makeup’ is familiarly petulant. Less hiding behind effusive vocal effects and more focus on an obvious ability to create brilliant electro-pop songs would make this album a triumph.