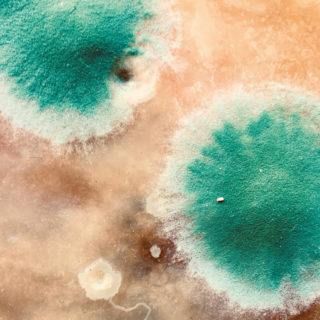 There’s a stir of excitement to be felt whenever Wacław Zimpel’s name appears on a new record sleeve. Even though you suspect that “greats” are idols of a bygone musical era, it’s easy to feel that the story of the Polish composer is similar to a traveling troubadour’s, a figure who, alto clarinet in tow, finds himself paired with disparate musicians across the continent, before promptly moving along with the tip of his hat, his work here done.

We’ve already heard at least three releases from Zimpel in 2020 — two solo LPs and a collaboration with synthesist James Holden — and Primal Forms, the fourth to bear his name, shows that he might have some of the best rapport of his career so far with English electronic producer Sam Shackleton. Having devised a fireball of a debut last year as Tunes of Negation, Shackleton’s meticulous and strange programming provides Zimpel’s semi-improvised jazz studiousness with, paradoxically, both rootsy humour and arm’s length regimentation.

‘Primal Forms’ begins with due emphasis on the ‘primal’, as a heavy-set stomp bellows like the tin-can funk of Faust’s C’est Com… Com… Complique. But where Primal Forms deviates from the ramshackle psychedelia of Jean-Hervé and Zappi is in constant, subtle evolutions and not in meditative repetition, though deep reflection seems built into this amorphous architecture. Zimpel’s fury on the clarinet breaks through in rasped exhalations a smidgeon shy of animalistic squalls, before fading into a raga-like hum — a vision further realised later in the bolshy harmonium ambience of ‘Primal Drones’ — preambling the closing minimalist movements that set the piece soaring. Phillip Glass looms large among the influences of Zimpel, who utilised his arpeggiated style as a mechanistic counterpoint to the rootsy thicket of his ‘break-out’ 2017 collaboration with Jakub Ziołek. Primal Forms ranks beside it in scope and methodology.

‘Ruined Future’ solidifies the additional presence of electric-era Miles Davis, met with Shackleton’s pedigree as a meticulous arranger of aggressively avant-garde music. There’s a sense throughout Primal Forms that everything could descend into chaos at any moment, and the money’s on Shackleton for having kept things in check. Distorted, trumpet-like sounds rattle like the opening passages of Bitches Brew as another hammond drone seeps in straight off the middle section of ‘He Loved Him Madly’. Punctuating handclaps gradually form a beat as the spirit of a different minimalist, Steve Reich, appears with vivacious cyclical phrases (a marimba-like instrument, maybe) at the close.

Time and time again, Zimpel hones a sound world all his own, bringing chameleonic sensibilities to each and every thing he happens to pick up. But as tempting as it might be to view Zimpel as his very own ideal backing band, Primal Forms again shows that he works best as part of a symbiotic relationship — and with Shackleton better than most.