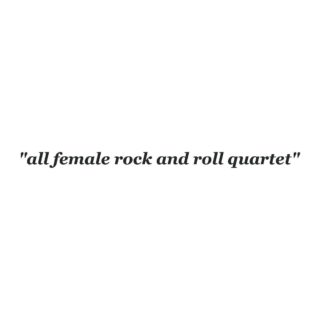 Six years since their last album, The She’s are still soundtracking a low budget teen film about boys, heartbreak and kissing. Filled with the breezy ’60s-influenced pop of Best Coast, ‘All Female Rock And Roll Quartet’ (sarcastically named after the band’s recurring description by others) leaves the feminist politics to the title alone. Self-produced – with a little help from tUne-yArDs’ Merrill Garbus – the San Francisco outfit’s second album has moments of mild experimentation, including the backwards tape on ‘Be Alright’ and the surf-inflected instrumental of ‘Local Favourite All Female Rock And Roll Quartet’, which bleeds with half-buried conversation.

For the most part, though, they stick to what they know best: straightforward indie-pop. ‘Anywhere But Here’ and ‘Ashes’ fill the void that had been left by The Breeders, while ‘Sick’ is how great The Bangles were as a garage-pop band. There’s nothing here that hasn’t been done before but it’s delivered with enough conviction to make it sweetly yearning.