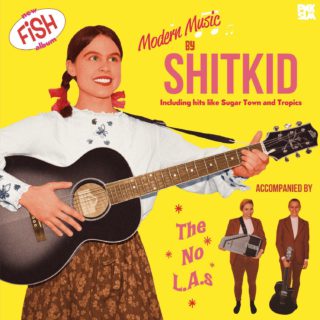 Don’t let the old school rock and roll album sleeve fool you – the debut album from Swedish auteur ShitKid could only have been released in 2017. Åsa Söderqvist’s postmodern approach to pop music has echoes of Le Tigre in its fuzzy electro-surf riffery, the unexpected arrangements and found sounds of tUnE-yArDs and Shamir’s scattershot approach to genre norms.

The murky production across ‘Fish’ is a world away from the shimmer and gloss that usually emerges from the Gothenburg indie scene, with nods to Iggy Pop and Suicide amongst the rockier moments. Söderqvist certainly has a way with an intriguing turn of phrase (‘Drive fast, that’s immortality,’ she sneers on the nursery rhyme-like ‘Two Motorbikes’), but her songs often pull in too many directions to quite catch fire.

A lot of the tracks here can’t decide if they want to be lullabies, punk anthems or dirty electro, often settling on an unsatisfying mix of all three. While Söderqvist shows undeniable promise, particularly on the sultry closer ‘Gettin’ Mad’, ‘Fish’ simply casts her net too wide.