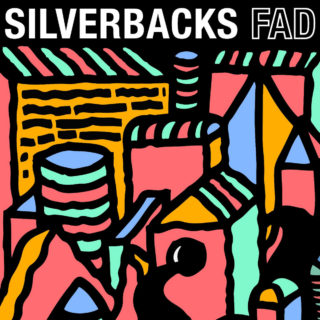 “Same old punk trick in the book. And you want it to go somewhere?” asks Daniel O’Kelly on Fad’s opener Dunkirk. Already Silverbacks are attempting some nifty metaphorical backflips, juxtaposing the image of a boorish, ageing punk with lines of defeated squaddies waiting to be plucked off the beaches. It leaves you with an uncomfortable question: namely, are we all sat on that beach, washed up and clinging to the notion that if we did all again, exactly the same way, then somehow it’ll turn out differently?

It’s a great set up for a record that, in a lot of ways, plays with the idea of being a bit past it. In a recent interview for NME, brothers Daniel and Killian O’Kelly admitted that putting out a debut album at the age of 30 felt a bit strange, but with age comes an outsider’s perspective. On Fad, Silverbacks are positioning themselves as the world-weary Fall-esque foils to Dublin’s fraught post-punk scene; judo-flipping furious bombast with witty humour and a nihilistic sense of self-awareness. While the album’s name implies the futility of chasing after fleeting scenes, the songs on here rip into the idea of ideology as empty posturing be it reductive, unquestioning nationalism on ‘Drink it Down’ or the cringey spectacles of politicians trying to stay relevant on ‘Fad ‘95’.

So it’s a bit weird that, while Fad doesn’t shy away from delivering progressive social observation, for some reason it packages them in a vintage clothes store version of ’00s indie rock. Silverbacks have an unfortunate habit of wearing their influences clearly on the sleeves and listening to the record starts to feel more like birdwatching the more you go on. ‘Klub Silberrücken’? Yep, that’s them doing Fugazi. ‘Fad 95’? That’s Pavement. Don’t get me wrong, the irony of making a record that moans about formulaic revolution but is basically a victory lap through late-nineties alternative rock certainly isn’t lost on me. Nevertheless, I can’t shake the idea that Fad could have been a great album rather than merely a good one if Silverbacks had been brave enough to really fuck with the source material.