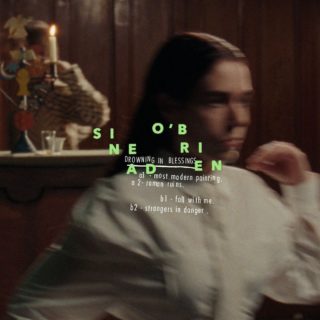 Irish poet and performer Sinead O’Brien’s surrealist lilt holds enough unaffected wonder for meaning not to be a necessary stop on her travels. Her debut EP Drowning in Blessings sounds like a series of unearthed passages scribbled down from old fables, intertwined with stolen entries from the rhyming dictionary, all casually tossed over her shoulder and held up by a rhythm section frantically batting her words between one another like a Scott Pilgrim power rally.

Caught in the slipstream of producer Dan Carey and Speedy Wunderground, the few singles released on Chess Club prior to Drowning in Blessings have found an understated but immediate acclaim, drawing an improbable line of best fit between Carey’s deviating worlds of post-punk and poetry, Fontaines D.C. and Kae Tempest. It’s no small thing to be hailed as Limerick’s John Cooper Clarke without the vacuum cleaner or Ford Cortina in tow.

O’Brien’s words are immediately, deliciously freed from their definitions, flung around to fit her cadence. Magic realism roams uninhibited, albeit with a spirit nearer to Angela Carter than her original freeform benchmarks Patti and Mark E. Smith. Only occasionally does the illusion come close to breaking. O’Brien’s tangential poetry has flickers of heady brilliance across the four tracks, but can become tangled in its own playfulness. “What worth on earth are the words?” feels like a clever cameo that catches the cameraman’s eye; whereas “streets move in time with our minds, only I see it this way because I am a stray” sounds like the attempted prophecy of someone you don’t want to go to the pub with.

Where the music’s not aware of its own dexterity, though, the mythical grandeur is contagious. ‘Roman Roads’ and ‘Most Modern Painting’ buoyantly showcase some of O’Brien’s best work. The pied piper poesy of ‘Fall With Me’ gorgeously tumbles around gauntly dancing guitars, unpretentiously joyful (“you can’t imagine the state that we’re in”). The music surrounding her hazy monologues has wholly matched her intrigue, too; it swells to fill her silences, and doubles back like a breaking wave when she speaks between freeform post-rock and rhythmic dub. When it’s these roads we’re led down, there’s little escaping her mystic power.

Get your leotard on – Ultraflex are here for a workout