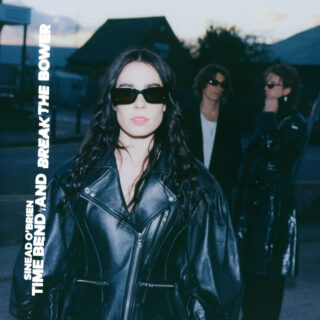 “The giants of time are turning tunes,” Sinead O’Brien repeats on ‘Holy Country’, the ominous highlight of her debut album Time Bend And Break The Bower. In her drawling delivery, it could be a threat or a celebration. Like many a modern buzzband from this part of the world, the Irish poet and multi-disciplinary artist is exploring post-punk sprechgesang that’s deadpan and politely political. Her eerie, time-bent lyricism and proggy dramatics are enough to make her stand out. Backed by veteran producer Dan Carey and striking while the sprech is sang, her debut is poised to make a splash.

“Dance!”, she commands on ‘Like Culture’, even though she’s making no attempt to gel with guitarist Julian Hanson and drummer Oscar Robertson. Instead she aims to disorientate with a jarring semi-rhythmic delivery. Her poetry is arresting, but its power is occasionally flattened by a faceless approach to post-punk musicianship. Given the formlessness of O’Brien’s writing, these are songs begging for dynamism and energy, and the loose jam-band approach leaves them without satisfying structure. There’s rarely meaningful interplay between her vocal and her bandmates. While ‘Holy Country’ and a few others offer the wildness suggested in her unhinged delivery, the album’s idea of raucous is adding the occasional cowbell into the mix.

The stiffness in these songs may well get shaken off as the band grows together. As it stands, her words are no more powerful on record than they are on the page.