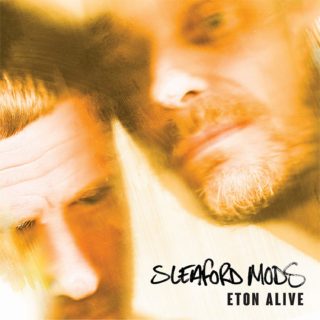 It’s been a half-decade since the one-two punch of ‘Austerity Dogs’ and ‘Divide and Exit’ pushed Sleaford Mods into unexpected crossover success. Listening to those records at the time, with their wilfully stark sonic blueprint, even the most ardent of admirers would have conceded a difficulty in seeing how much longevity there could be in the Nottingham duo. Fortunately for them, the last few years have seen a grateful nation ensuring that there’s more than enough grimness and instability to keep Jason Williamson’s pen busy. Daffodils for Wordsworth; Boris Johnson, baleful high street pubs and a king sized bag of Quavers for Williamson. What happened? Did Sleaford Mods put a hex on the nation to make Britain increasingly resemble something from the darkest reach of Williamson’s imagination?

If you take the arrival of Andrew Fearn for the album ‘Austerity Dogs’ as the legitimate starting point for Sleaford Mods (Williamson had released solo recordings under the name, but Fearn’s beats proved transformative to their sound and subsequent success), ‘Eton Alive’ is the group’s fifth studio album proper – a prolific run punctuated by no less than four EPs. Fittingly for an album released as an unhappy nation mires itself further into Brexit turmoil, ‘Eton Alive’ is Sleaford Mods’ most nihilistic, most bleak record to date – it’s also one of their most surprising, and perhaps most vital works yet. A typically cheery missive in the album’s press release underlines this point. “Here we are once again,” Williamson explains, “in the middle of another elitist plan being digested slowly as we wait to be turned into faeces once more. Some already are, some are dead and the rest of us erode in the belly of prehistoric ideology which, depending on our abilities and willingness, assigns to each of us varying levels of comfort that range from horrible to reasonably acceptable.”

Ahead of the release of last album ‘English Tapas’, Williamson gave up alcohol and drugs – the effect of this on Sleaford Mods has been him writing with renewed insight about consumption, masculinity and mental health. A key theme on the album is masculine repression and emotional inarticulacy. “We never touch the real feelings/ Just the empty discourse,” he barks on the track ‘Discourse’, and picks this up again on ‘Firewall’ (“You don’t know why you’re crying at all/ Because of your firewall”). Like the best of the duo’s work, it’s the perfectly expressed simplicity that packs the punch. Indeed, Williamson is especially good writing about his generation; the ecstasy generation hurtling into middle aged and struggling to make sense of their continuing alcohol and drug use.  You saw this at points on ‘English Tapas’, but ‘Top It Up’ on this record is perhaps his best attempt at the message yet – a dank portrait of the funeral of what appears to be one of his contemporaries. “Two lines on the table at a fucking funeral for somebody who got sick of two lines on the table” is a lyric that goes straight to the small of your back.

As is often the case in Williamson’s writing, his interior monologue competes with the voices of those around him: “What a nice man,” someone appears to observe, “there was nothing nice about the dickhead,” he spits back. ‘Top It Up’ also speaks to a development in the project – the furious speed poetry (what they term “rant songs”)  that typified albums like ‘Divide and Exit’ have faded from view with each subsequent release, and Williamson as a writer appears to be a late convert to the idea that sometimes less can be more.

Though crucially informed – galvanised even – by American hip-hop, Sleaford Mods are almost certainly not hip-hop. What they do, however, is use the spirit of the genre to communicate a personal and national comedown in a way that no other style of music than hip-hop could be a conduit for. The late cultural theorist Mark Fisher, himself a fan of the band, wrote: “A secret sadness lurks behind the 21st century’s forced smile. This sadness concerns hedonism itself, and it’s perhaps in hip-hop – the genre that has been most orientated to pleasure over the past 20 odd years – where this melancholy has registered most deeply.”

This is precisely how Sleaford Mods use tropes from the genre, and five albums in there’s little else in modern Britain that sounds more haunted or paranoid than Andrew Fearn’s donking, dead-eyed loops. Indeed, ‘Eton Alive’ is Sleaford Mods’ most sonically diverse and exciting release yet. Always understated, Fearn has been able to work ideas from dub, post-punk and rave into a framework that remains minimalist and un-busy. Its simplicity is a red herring to the beat-maker’s talent – the person who bemoans the guy “just stood behind a laptop pressing play” looks increasingly like the moron in an art gallery pointing at a Kandinsky and insisting their blindfolded child could do better.

Fearn’s inventiveness is at its most skilful on ‘Discourse’, late in the album – a rattling throb of punk funk akin to ESG or even Talking Heads. At their most full-throated, like the ominous ‘OBCT’, the basslines are reigned in and snarling like a Rottweiler on a leash. Not all of the experiments, however, do work. ‘When You Come Up To Me’ sees Williamson properly singing. His hoarse, blizzard-battered croon does actually really work (as it did on 2017’s ‘I Feel So Wrong’) but the material itself underwhelms.

As with Williamson’s decision after ‘Key Markets’ to stop referencing celebrities (this has thankfully waned on this record, with a brilliant line about Graham Coxon “looking like a left-wing Boris Johnson”) there’s a carefulness not to fall into anyone’s trap or become a rent-a-gob. Take opening track ‘Into the Payzone’, in which Williamson gets to have his cake and eat it, getting in a gag about hipsters (“I don’t use flavoured vapes/ they’re blow up dolls for hipsters mate”) before wrong-footing the listener and insisting that Sleaford Mods are “not anti-hipster fakes”.

As usual, there’s genuine laugh-out-loud moments of offbeat humour across the record – the insistence that white dog shit is safe for kids to play with, Williamson’s delight at getting one over on the council by having a surplus recycling bin. There’s even occasional tacit acknowledgements of Sleaford Mods’ success and change in status – “you know I just fantasise,” he sings on the stellar ‘OBCT’, “in a house three times the size of my old one.” This also surfaces on lead single ‘Kebab Spider’ – a scathingly funny attack on experts, Channel 4 documentaries and ‘bingo punks with Rickenbackers’, which sees Williamson insist “of course we’re fucking relevant!”.

So what kind of writer is Jason Williamson now? It would be a mistake to think of him as a social realist – if anything, his vision of everyday life is a maximalist, hyper-real, ultra-squalid interpretation of reality. This is something perhaps missed by some of Sleaford Mods’ older fan base, keen to align their new heroes with their old ones – the Clash, the Jam et al. This is a category error. Williamson’s voice is not one of rage or protest, but of resignation tempered with occasional disgust. There is no call to arms. “It’s not enough anymore to want change,” he sings on ‘Subtraction’, “you have to do change, but the only change I like sits in my pocket, I’m a consumer.” It’s precisely this desperation that makes ‘Eton Alive’ all the more nihilistic, all the more troubling. The protestor at least believes that there’s a chance of change. This is most explicit on the track ‘Policy Cream’, best summed up by Williamson in an interview ahead of this album’s release, where he explained that he wanted to criticise “this idea that policies are these shining beacons of hope, because they’re not. They’re a band-aid on a knackered trap. I’m still of the opinion that it’s going to get really bad before it gets better – if it ever gets better.”

The journalist Michael Hann coined the term ‘furious absurdism’, for a kind of angry surrealism found in the photo collagist Cold War Steve, and also in British bands like Shame, Cabbage and Idles. You don’t have to like the above groups to appreciate quite how much Sleaford Mods set the tone for how a certain type of British band relates to the world around them, and ‘furious absurdism’ has been one of the defining artistic responses to austerity and Brexit. And thus, at Sleaford Mods’ most commercially successful and culturally influential moment to date, in ‘Eton Alive’ they have delivered one of their strongest records so far; a hellfire missive thrown down by a band still very much at the peak of their powers.