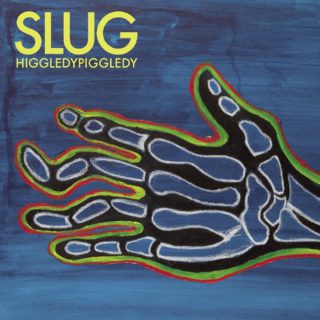 Ever wondered what it would sound like if Alex Turner played guitar in the band CAKE? Anyone? If the answer is ‘yes’ then fear not – the question has been answered. It would sound like ‘No Heavy Petting’, the opening track and lead single on SLUG’s new album ‘Higgledy Piggledy’. It’s rather good, actually. As the name might suggest, ‘Higgledy Piggledy’ is a collection full of exactly these kinds of strange musical bedfellows.

On this second album from Ian Black, the one-time Field Music bass player was aiming for something a bit more minimalist than his 2015 debut, ‘Ripe’, but ‘minimalist’ here is a relative term. While the record is primarily driven by guitar and percussion, it is also a Dada cut-up of genres and styles, from the tropical, psychedelic pop of ‘Lackadaisical Love’ to the theatrical indie-adjacent hybrid ‘Petulia’. The latter is one of the more successful tracks on the album, with its sharp electric guitar clambering around Black’s see-sawing vocal.

‘No Heavy Petting’ and album closer ‘You Are As Cold As A Dead Fish’ are similarly beguiling, as is ‘Abitrary Lessons In Customs’ with its cinematic strings. But the collage does crumble in places. The half-PC Music/half-classical instrumental ‘A Soft Shoe Number’ feels incidental at best, while ‘Earlobe’ is a muted near-miss despite its impressive orchestral snapshots. Moments like these let the record down.

Slug’s ‘cut ‘n’ paste’ technique is inconsistent by definition – both in style and success, but there’s certainly enough charm to be found here.