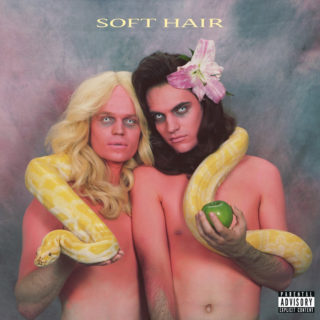 Following an implausibly inauspicious introduction – involving misplaced blame for the theft of a fibreglass pig – Connan Mockasin and LA Priest’s Sam Dust began writing together in 2008, whilst Mockasin was supporting Dust’s then-band Late of the Pier.

A cursory glance at the artwork for their first collaborative LP – depicting the duo as extraterrestrial sirens in a pastel-coloured Eden – confirms that their musical partnership has progressed down a similarly unorthodox path.

‘Soft Hair’ is undeniably odd, but you’d demand nothing less from two musicians who’ve previously woven electromagnetic drones and bizarre yarns about dolphins into their work. The whole endeavour seems driven by a desire to explore their most idiosyncratic urges, be that embracing alien creative methods, delivering ludicrous couplets like, “I like to watch you run, but I’ll never touch your bum,” or repurposing a previous collaboration from La Priest’s ‘Inji’ LP (‘So Goood’).

For all its disorientating touches, ‘Soft Hair’ feels surprisingly cohesive, particularly when you consider it compiles eight years’ worth of scattered sessions. Continuity comes in its exotic feel – largely rooted in hallucinogenic funk, bar a couple of psychedelic instrumentals – and in the comforting presence of the pair’s distinctive and complementary quirks, from Dust’s tropical, cut-and-paste percussion to Mockasin’s drunk guitars and helium croon.

If you can stomach the latter, and are prepared to leave logic at the door, ‘Soft Hair’ makes for a diverting trip.