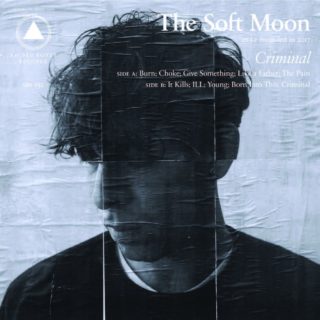 On his fourth LP, California’s The Soft Moon (musician and producer Luis Vasquez) mines a more lateral vein of industrial rock than 2015’s neo-darkwave ‘Deeper’. ‘I wish I could be somebody else,’ strains Vasquez on ‘Burn’, flipping Trent Reznor’s animalistic libido inward, to the same hyperviolent EBM pulse. What is industrial rock without a tall glass of the dark stuff? ‘Criminal’ finds Vasquez plumbing the depths of his self-hatred, which isn’t always as pleasant as it sounds.

It’s hard not to think of a B-grade Jesse Lacey when Vasquez sings, ‘how can you love someone like me?’ on ‘The Pain’, or when he meditates on his frisson with addiction on ‘Choke’. “Waste me / kill me now,” he sings on the title track, and it surprises nobody. This isn’t to say that ‘Criminal’ lacks shock value – a wayward bongo appears at one point. Still, with acts like Sacred Bones label mate Pharmakon still whipping industrial music into ever-obscene forms, it’s hard to know where groups like The Soft Moon stand.