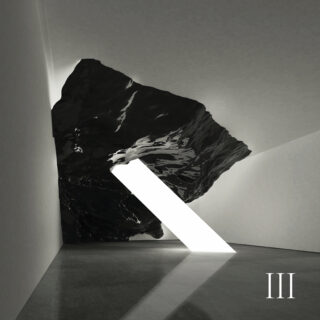 Tomorrows III is the latest instalment in the Tomorrows project from New York-based soundscape artists Son Lux. It’s a fairly ambitious project: consisting of three volumes recorded over the course of a year, according to the press blurb, it brings, “an active, intentional approach to shaping sound,” summing up “the anxiety and urgency that define our present moment.”

It’s certainly been an anxiety-inducing 12 months, and Tomorrows III doesn’t shy away from that. The album opens on ‘Unbind’, which combines soaring, cinematic strings with skittering beats and a loopy prog-rock guitar line. It would be the perfect, overblown theme song to a slightly silly sci-fi film – but presented without visual accompaniment, it’s needlessly bombastic. Other experiments are more successful – ‘A Different Kind of Love’, for example, is engagingly weird. The track is a tight 3 minutes 15, meaning that none of its clashing sonic elements hang around long enough to get boring.

Elsewhere, some moments are genuinely lovely. ‘Plans We Make’ (feat. Kadhja Bonet) is spare, sensual R&B, reminiscent of recent offerings from FKA Twigs and Kelela, and ‘Vacancy’ (feat. Kiah Victoria) combines honeyed vocals with a background hum of arpeggios and thrumming bass, with blasts of processed strings bringing the song to an affecting conclusion.

But there are too many tracks that slip by without trace, or overstay their welcome. Tomorrows III isn’t short on ideas, but the listener is left with the feeling that this would better make a soundtrack to something scary or dramatic. Without aliens or explosions, it’s just a bit disappointing.