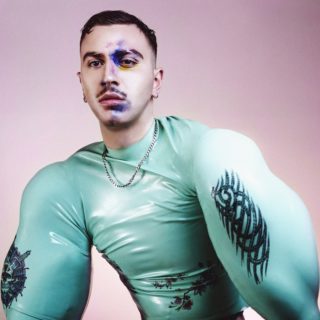 Boy plays Sonic. Boy loves Sonic. Boy uses computer to re-create his favourite ’90s video game tunes, with no music theory knowledge and a whole lot of passion. It’s a tale as old as at LEAST the classic iPod. SONIKKU, aka Tony Donson, takes his artist alias from the Japanese name for Sonic. Like many a young music nerd, his career began with a deep love and curiosity of the music he’s been exposed to, and a need to bring that fantasy world closer to his reality.

Boy discovers Madonna. Boy loves Madonna. And so SONIKKU’s journey to Joyful Death began. The producer’s new album is a sharp emulation of eighties pop worship that recreates the cheesy, well-worn features of the genre with enough glee and observation to make it convincing. These songs distil the camp of italo-house and synth-pop into sleek, hook-driven songs. Like PC Music, Britney Spears, Lady Gaga and Charli before him, it’s the fun of removing everything but surface-level to paradoxically create a deeper connection with the audience. You know the meaning. You know the story. Just dance. It’s pure escapism. An assortment of vocal guests (Little Boots, LIZ, and Douglas Dare) assume the roles of faceless ciphers delivering cliché lyrics and homages the icons of the past. The love SONIKKU has for this style is there in these familiar choruses and synth tones.

For me at least, it’s too obvious. This becomes apparent when comparing SOPHIE’s remix of single ‘Sweat’ to the original. SOPHIE’s bolder, harsher take, with its crumbling bass kicks and more pointedly syncopated groove, is more thrilling and distinct. SONIKKU’s faithful reinterpretations often don’t do much to set themselves apart. Closer ‘Remember 2 Forget Me (Piano Version)’ is a knowingly basic ballad, but its hackneyed lyrics aren’t more charming because they’re aware they’re doing a bit. Even during stronger moments, like the acid-house tinge of ‘WKND’, Joyful Death does SONIKKU a disservice by not coming through with a personality of its own.