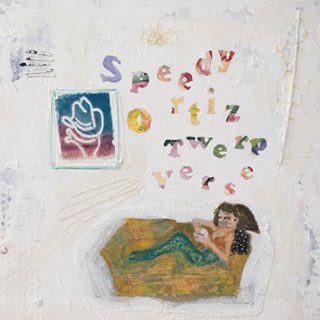 The world is being swallowed up by slime. At least, it is according to Speedy Ortiz. The video for ‘Lucky 88’, the lead single off new album ‘Twerp Verse’, shows just that: a viscous, toxic green ooze seeping across the ground and threatening to consume everything in its path. The clip explores our absorption in technology and a reluctance to engage with the wider world, even (or maybe especially) as it wastes away in front of us. In some ways, ‘Lucky 88’ and its video are a statement of intent for ‘Twerp Verse’. The track explores singer Sadie Dupuis’ loss of faith in her former political role models, but with wordplay like “I once was lost but now I’m floundering” it speaks to a disillusionment that infects all aspects of life.

This dissatisfaction is clear elsewhere on ‘Twerp Verse’, like in ‘Villain’’s takedown of awful ex-partners and on the twitchy, anxious ‘Lean In When I Suffer’. ‘Backslidin’’, too, is emotionally downbeat but instrumentally sharp, borne along by lilting grunge guitars.

Musically, ‘Twerp Verse’ has more in common with Sadie Dupuis’ home demos than previous Speedy Ortiz records, with a lo-fi production sound that gives the album a sense of lightness in spite of the themes of frustration. Even the lightheartedness of the album’s title is key – on ‘Twerp Verse’, Speedy Ortiz are refusing to get bogged down in the slime. But they want you to know that it’s there.