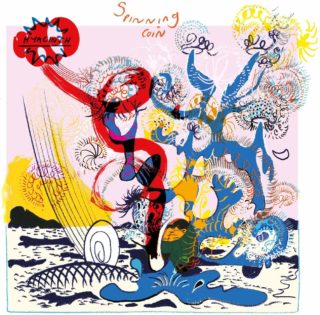 World War Three could well be imminent, Australia is on fire and the only thing to do is sit and idly watch as it all blows up in our big, stupid faces. 2020 is here and so far there’s not too much to be hopeful about. For a band that have been through it, surprisingly, Spinning Coin are sick of our complaining.

Having reshuffled personnel by recruiting Canadian bassist Rachel Taylor, the band had been based in Glasgow as ever, until increasingly strict visa laws forced Taylor out of the UK. She moved to Berlin, and guitarist and vocalist Sean Armstrong went with her, splitting the band across Europe and releasing their tight hold on the Glaswegian indie scene. Eventually rendezvousing in western France to complete Hyacinth, the band’s new album ditches the scratchy social commentary of their debut for a somewhat lighter rhetoric.

It’s all lovestruck indie pipedreams delivered through twangy, psychedelia-soaked pop. It may as well be a meticulously preserved antique; a mint condition mid-noughties British guitar band with all the visceral energy of something that wasn’t yet already long out of fashion.

The band will you to succumb to lovesick intoxication on tracks like ‘Laughing Ways’ and ‘Feel You More Than World Right Now’, and sometimes succeed, because aside from the melancholia, Taylor’s wispy vocals on a song like ‘Black Cat’ flirts with the sort of reassuring optimism that everything might just turn out to be alright after all.

Henry Green's Half Light is very clean, very polished, and a little bland