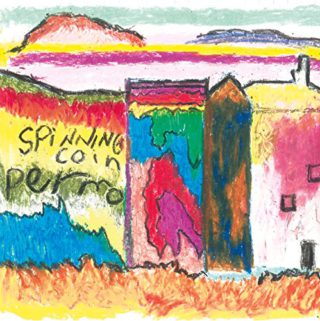 In the motor industry, a ‘cut and shut’ is a vehicle that’s been made by welding together two different bodies. Spinning Coin are the musical equivalent, being forged by two songwriters whose compositions are pulling in different directions. The Glaswegian quintet’s debut album was recorded with Edwyn Collins and the overall tone is steeped in early ’90s indie.

But while Jack Mellin appears to have been influenced by The Wedding Present and The Delgados on the energetically bellowed ‘Tin’ and ‘Magdalene’, Sean Armstrong draws on the melancholy country of Big Star and Teenage Fanclub on ‘Floating With You’ and ‘Metronome River’. There’s a similar divide in the lyrics, with Mellin being more inclined to be politically engaged (the slacker-ish ‘Money Is A Drug’ calls out “class war”) while his band mate is largely content to address affairs of the heart. The closest the pair come to complementing one another’s style is ‘Be Free’, on which guitars crunch into Armstrong’s fragile delivery. In the absence of more such collaborations, the album is frustratingly incohesive.