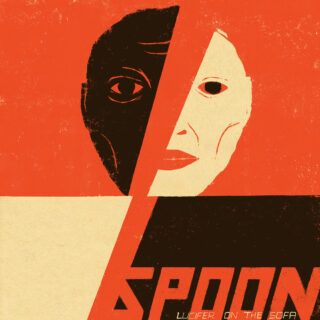 There’s a genuine quality to drums played and recorded by a live band, an inner sound that only comes through when the set resonates with all the other instruments, clear and smooth; when you can hear the stick hitting the membranes; it’s the signature sound of the best rock music. It’s exactly that sound that welcomes the listener to Lucifer On The Sofa, the tenth studio album from Spoon, that marks the return to their hometown of Austin.

Far from the gelid sonicscape of their last few records’ embrace of electronic music, Lucifer on the Sofa is quintessential rock, without any modifications needed. Frontman Britt Daniel and guitarist/keyboardist Alex Fischel found themselves back in Texas during the Covid outbbreak, writing and recording in drummer Jim Eno’s Public Hi-Fi studio. The decision to make an album “the old-fashioned way” came while on tour, with a rediscovered pleasure of playing together and the recognition of how their music should be made: “The best rock music… [is] about what happens in a room.” And into a room they went.

Opening with a stunning live rendition of Bill Callahan/Smog’s ‘Held’, Lucifer on the Sofa is hands down one of the best rock albums released in the last few years; deeply inspired by the place it was written and recorded in, and full of honest and relatable introspection. The band’s joy at playing together again in the studio is tangible, and it’s what gives this collection of textbook tracks that special vibe, the impurity necessary to be perfect and true. “That moment was a once-in-a-lifetime feeling,” commented Daniel about the recording reunion; and Lucifer on the Sofa is a once-in-a-lifetime album, that succeeds in resuscitating moribund aesthetics in the best possible way.