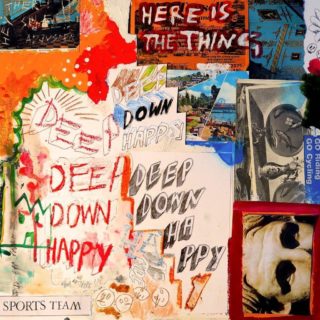 2019 was a hell of a year for Sports Team. Labelled ‘everyone’s new favourite band’, they set about delivering on that tag with a trail of feverish live shows where everyone was literally invited. And so, from bussing fans to Margate and headlining stages at festivals, to impromptu gigs at their local, that scattergun exuberance hits with the same velocity here on their debut.

Everything is packaged into tight 3-minute bursts as you hurtle through The Maccabees-esque ‘Here’s the Thing’, pick up a few Brexit tropes on ‘The Races’ and unpack “I just wanted to be your Demi Moore” on ‘Kutcher’. Opener ‘Lander’ also punches straight in as vocalist Alex Rice instantly establishes his part-Mick Jagger/part-Eddie Argos persona—and he proves to be the lightning rod throughout, shouting, straining, strutting his way through tracks, snapping sardonic lyrics like, “This avant garde / Is still the same / Go to Goldsmiths and die their fringes to know they’ve made it only / When they’ve signed their rights to Sony”.

Ironically, it’s the kind of quintessentially British indie-pop that Transgressive might have signed up in their seat-of-the-pants genesis, and it’s that sense of loose ties and loose limbs that gives Deep Down Happy its endearing, nostalgic feeling, evocative of spilling into the streets for sunshine pints before ending up in a club, a stranger’s front room… or another bus to Margate. A debut as wry, energetic and charismatic as their inexhaustible live presence has always promised.