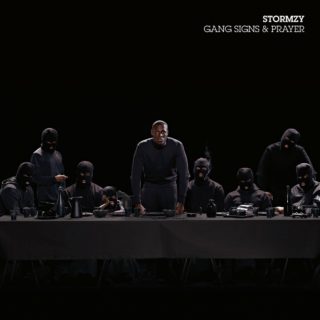 “I just went to the park with my friends and I charted” jokes Stormzy on ‘Cold’, the frantic, fizzing banger near the beginning of his debut album. His rise to fame has been rapid, thanks to a couple of excellent hype tracks and a Christmas number one campaign that had him beating X Factor hopefuls with a song that, as the man says, he originally recorded as a freestyle while messing around with his mates. Some Grime artists spend years crafting a song that’ll get them mainstream success; Michael Omari can go viral just walking around in his daily routine.

After this early success, Stormzy disappeared, took his time reflecting and building a sound, and now returns with ‘Gang Signs and Prayer’, an assured album that looks both outward at the larger music scene for its influences, and inward for a compelling reflection at the man behind the moniker. He pulls from gospel, R&B and soul as well as his past as an old school grime freestyler, in a mix that feels heavily inspired by contemporaries such as Chance the Rapper and Kanye West.

This is evident on ‘Blinded By Your Grace’ Part’s 1 and 2 – the first a surprisingly vulnerable ballad, with a one-take sound that evokes West’s ‘Only One’, and the second a baptismal shower of guitar solos, organ, wailing choirs and clattering drums. On ‘Cigarettes and Cush’, he gives us a slow jam that would have fitted snuggly on ‘Acid Rap’, if it wasn’t for the charismatic British Twang from himself and Lily Allen in an Easter-egg cameo.

Despite the obvious comparisons, Stormzy remains fully his own as an artist. Lyrically, he’s unravels the layers of bravado found on brash (and, obviously, brilliant) hype-songs like ‘Big for Your Boots’ and ‘Return of the Rucksack’. For the majority of the album, he’s a son, a boyfriend, a mate, and a grafter, rather than a gruff grime stereotype. On ‘Velvet’, a smooth flip of NAO’s debut album intro, he shows more range that most MC’s could muster, giving Drake a run for his money with classy verses free of struggle bars. “Man thought that Stormzy couldn’t sing” he laughs at the end, with a charming nervousness that suggests he didn’t quite know either; the aforementioned ‘Blinded by Your Grace’ was recorded on his couch to get him in a comfortable space for a full vocal cut.

It’s moments like these that show Stormzy pushing himself as an artist. “This year I learnt how to take care of business / next year I’ll learn how to play the guitar” he raps on ‘Big for Your Boots’, with a bark that’s enough to make you believe him if you didn’t already.

Some moments aren’t as memorable. The added sheen from Fraser T Smith’s production, who’s previously worked with Sam Smith and Adele, can occasionally sound flat, ironing out some of the edges that could have helped boost the passion lurking in Stormzy’s subdued singing.

Mostly, this is an emphatic debut from a rapper that could take Grime to commercial heights it’s rarely seen. Its final two tracks are a knockout that shift from glorious, swaggering showmanship to a dramatic excavation of inner demons. Grime is growing up, and Stormzy is gracefully towering above the rest.