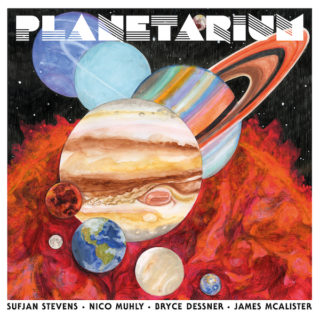 ‘Planetarium’ began life in 2012 as a live commission by a Dutch concert hall, for which Nico Muhly, Bryce Dessner, Sufjan Stevens and James McAlister wrote a suite of songs for string quartet and trombone septet about various celestial phenomena, with Stevens providing the lyrics and vocals. Five years on, the performances have been rearranged in the studio, and the result is a little akin to staring up into a planetarium’s dome: bewildering, sporadically beautiful, almost terrifyingly random, and not quite as satisfying as experiencing first hand the thing it’s depicting.

Given Stevens’ love of a thematic album – his two US states albums are both masterpieces, and ‘Enjoy Your Rabbit’, his song cycle about the Chinese zodiac, is an engrossing experiment – this sort of territory should be a happy hunting ground for him. And when he’s left alone, it broadly is: ‘Planetarium’’s opening and closing songs, ‘Neptune’ and ‘Mercury’, are essentially Stevens solo, and are both gorgeous, rich, poignant and elegant in a way that the intervening pieces unfortunately subjugate. Accordingly, several songs (‘Venus’, ‘Jupiter’, ‘Saturn’) start promisingly but are then bludgeoned by bizarre electronica, and elsewhere the tenderness of Stevens’ melodies is undermined by rather ambient, overlong washes that float by aimlessly. That’s a shame, as somewhere within the theatrics and vast emptiness of ‘Planetarium’, there lies a rather lovely record.