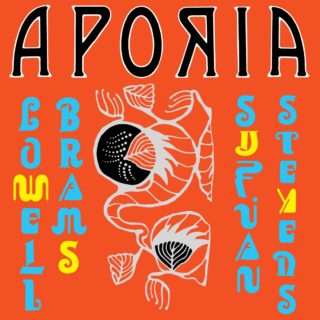 Listeners expecting a continuation of the ideas Sufjan Stevens explored on his two Grammy and Oscar-nominated contributions to the soundtrack for Call Me By Your Name – ‘Mystery of Love’ and ‘Visions of Gideon’ – should be prepared for something very different on his newest album, Aporia. Unlike his songs for Luca Guadagnino’s 2017 romantic drama, this is not a soul-tearing record full of desolate vocals; in fact, there are no vocals at all until more than halfway down the track list. Instead, it is an atmospheric experiment in moulding sound towards the goal of meditation.

The title of the album means ‘an irresolvable contradiction’. This new collaboration with Lowell Brams – Stevens’ stepfather, namechecked in the title of his 2015 album, Carrie & Lowell – is a venture in approaching a new state of mind through sound, by pushing and pulling until one reaches a tense but stable peak. However, the experiment isn’t pushed far enough here; the tepid atmosphere that results falls short of the record’s apparent intention. This is in part due to length. At 21 (albeit short) tracks long, this album is repetitive.

On the second half of the album, starker sonic characteristics are introduced. Disjointed sounds and beats writhe and entangle themselves, forgetting balance and plunging headfirst into darkness. Overall, most of the tracks are indistinguishable from each other. Had the album been streamlined and sounds been combined into the same track as their foils, perhaps it would better evoke emotion. Atmospheric music shouldn’t slip by without listeners noticing, instead it should inspire mental stretching – widening and contracting like waves pushed along by the current of the songs – which this album may hint at, but doesn’t quite achieve.

The most memorable track is ‘Glorious You’. The atmospheric synths and fuzzy beat invite listeners into a world of sci-fi films, evoking a protagonist who has just emerged, perhaps out of the safety of a spaceship into the unknown, but exciting, landscape of an alien planet. This halfway mark featuring breathtaking strings is a crescendoing landmark that is on the path to breaking new ground. If Stevens and Brams venture further down that path in future, they might discover something special; unfortunately, Aporia is not that discovery.