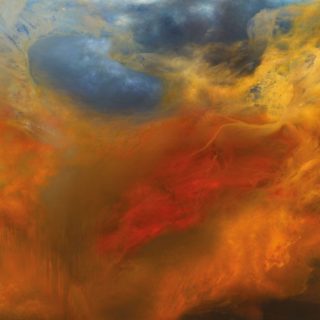 The globe’s #1 doom/drone metal act Sunn O))) have spent over 20 years dwelling in a dark realm of their own design, each release a document of core members’ Stephen O’Malley and Greg Anderson’s single-minded expedition in search of the perfect low (and heavy). Vastly outnumbered by mini-albums, self-released live bootlegs, demos, and collaborations, their LPs tend to be one of two things; mere artefacts for the archive, or an essential snapshot of the journey thus far. So, with a companion album due out later in 2019, does their ninth studio album Life Metal mark a kind of branching path?

Answer: not exactly. ‘Between Sleipnir’s Breaths’ opens with the gallop and bray of a horse, rendered menacing with big room reverb. Then, thar she blows! A bone-shattering, ground-opening invocation, a guitar riff like our planet’s orbit hooked up to an amplifier, as heart-stopping on headphones now as it’s been on every Sunn O))) record. It’s so vast as to swallow Hildur Guðnadóttir’s mousey vocal in its great maw. We’re mere minutes into Life Metal and we can already check off two boxes on our Sunn O))) scorecards: 1) the beefiest, slowest licks, and 2) allusions to atavistic histories (in Norse mythology, Sleipnir is Odin’s steed, and a symbol associated with pagan practices, so check an additional box for references to occult knowledge).

Solid droners ‘Troubled Air’ and ‘Aurora’ stay the course, leaving some experimentation to be desired, especially given their typically gargantuan, 10-plus minute lengths. But it’s hard to feel too dismayed by Life Metal when it sounds like Sunn O))) locking into their most formalistic work outside of ‘peripheral’ releases, unleashing immense power with remarkably streamlined resources (where the personnel of 2009’s Monoliths & Dimensions reached over 30, Life Metal is a quick headcount at only five). The album sparks with in-the-room intensity — which is surely credited in part to the bro-ducer’s producer Steve Albini — encircled in positive energy, rather than the usual despairing black hole. 25-minute closer ‘Novae’ is uplifting for its first half, its earthbound chords drawing themselves gradually towards the sky before blinking out like a dud firework, lamented by Guðnadóttir’s earthquaking cello drone.

Just as the goofy title suggests, Life Metal invokes a refreshing return to origin: the back-to-basics approach of a grizzled group in their parents’ garage, where they once rehearsed as spotty teens. All told, it sounds like they’ve found a new lease on life.