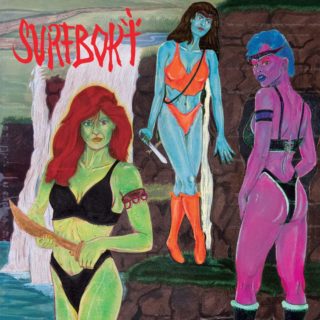 The punk scene continues to rage across the UK, flourishing under pertinent source material and societal angst provided by Tory austerity and Brexit induced disarray. As a result, there now seems to be an ever-increasing appetite for socially conscious, energetic freneticism in our music, and perhaps more than most, us Brits seem to possess an insatiable liking for people shouting over loud guitars. Not satiated with home-grown offerings, such as the ascent of Idles or the mounting crusade from the Dublin, the import trade of punk bands is strong – Amyl and the Sniffers have most recently smuggled their dynamic vigour across the border, and still no sign of let up in public interest.

Enter: Surfbort – a Brooklyn based four piece whose feverish racket is aspiring to exploit the current mood across the pond, apprehend our current disposition of political malady, and petition for our support by canvassing to our quintessential British trait of revelling in the face of insecurity and unrest.

Friendship Music’s seventeen-song duration may seem a daunting and drawn-out affair, but with the lengthiest track clocking in at a diminutive 2:27, it’s all over within a furious 13 minutes. At its best, it’s a record befitting of a night of careless debauchery. At its worst, it’s a reworked release of old themes offered decades earlier by first wave punk bands. But you probably already knew that.

While it’s an undeniably fun and dirty listen, it’s not until the cold light of dawn that you realise you’ve left your wallet in the taxi and you’ve spent all your money on cheap whiskey.