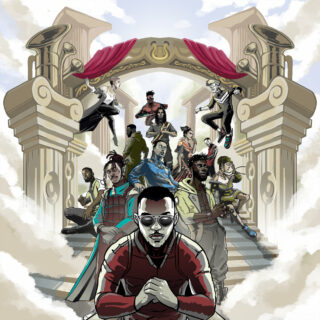 Community has always been a big part of what Swindle does. From Nubya Garcia to D Double E, many of London’s finest have rolled into the studio with him to realise his vision. With his latest album THE NEW WORLD, collaboration is still the name of the game.

The presence of Maverick Sabre may or may not be a good thing, depending on your stance on his particular brand of soul-rap crooning. ‘Second Guess’ feels like it could be a funky jam, were Swindle to have picked anyone else to guest vocal. But the rest of the star-studded line-up bring their best to the party. ‘Darkest Hour’, featuring Poppy Ajudha’s beautiful tones capturing an emergence from troubled times into the light, is a particular highlight.

Greentea Peng’s appearance on ‘What More’ brings all of the laidback Lauryn Hill cool that her debut Man Made delivered. Meanwhile, frequent collaborators Knucks, Ghetts and Kojey Radical join Akala on the propulsive ‘Blow Ya Trumpet’, which throws a brooding grime beat against bright brassy horns that feel like they belong more in a ’70s kung-fu film.

It’s clear that Swindle loves throwing together every aspect of his musical education together and seeing what sticks. The grit of pirate radio. The collaboration of his time on Brownswood. There’s a feeling of liberation throughout THE NEW WORLD, not just in the themes of race, grief and community, but in his sound. This is what makes Swindle such an exciting producer. Capable of balancing these sounds, a cast of friends and heavy topics with a deft touch. It might not be as rich a feast as his previous record No More Normal, but it’s still a vibrant smörgåsbord worth tucking in to.