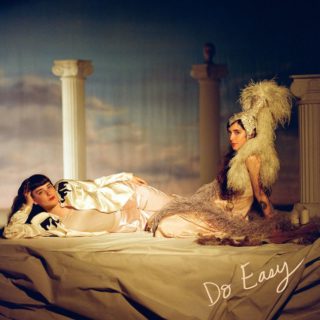 Now that Bob Dylan has won the Nobel Prize for Literature we can expect a spate of experimental folk music releases from young creatives who realise they don’t have to do anything as tedious as write a novel to rise to the dizzy heights of the literary elite. Tasseomancy, fronted by Canadian twin sisters Sari and Romy Lightman have been around long enough to avoid accusations of bandwagon jumping.

This is ethereal, dreamy folk-cum-pop music: Kate Bush meets Joni Mitchell by way of the soundtrack from Baz Lurhman’s Romeo and Juliet. In the opening track, ‘Dead Can Dance & Neil Young’, they encourage the listener to “fade into folk music”. That call frames this whimsical, trippy album quite perfectly. ‘Do Easy’ channels a ’60s folk vibe. It’s the kind of record you imagine would be greatly enhanced with a spliff full of mellow hashish and a burgeoning interest in Eastern religious practices, although the orchestral ‘Wiolyn’ and the pretty, haunting ‘Gentle Man’ might induce a psychedelic epiphany without the addition of narcotics or transcendental spirituality.