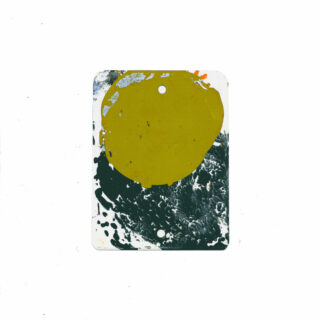 Reading the tracklisting for prolific US electronic artist Taylor Deupree’s latest album, you may wonder whether it was lifted directly from a particularly cogent sentence in James Joyce’s Finnegans Wake, with it reading: ‘Mir’, ‘Mor’, ‘Mer’, ‘(murmur)’, ‘Mar’. Naturally, the album is titled Mur.

Beyond the bilabial sequence, the music itself has spiritual parallels with the Irish writer’s infamous narrative, where elemental sounds, atmospherics, and planes of existences meld to conjure the rippling nocturnal waters of our deep dreamscape.

Released on rising Belgian-based cassette label Dauw, Mur is an album dictated and sustained by remarkably few sounds, the music navigated by the slightest directional changes and the most fleeting of moods. The reverberating keys from the isolated piano that stalks the opening tracks recall A Winged Victory For The Sullen at their most solemn or the spectral magnetic resonator piano used by neo-classical Brussels group Echo Collective to envelop their sound in the ghosts of struck keys.

The songs thicken and evolve as Mur progresses, like they are fed by the rushing water that crackles through each of the songs. The sparse, minimalist ambient soundscape grows into greater bodies of music, where Deupree pours in the consternation of the past year which besides the claustrophobia of the pandemic, has seen him wrestle with the loss of his father.

The gentle ripples from opening tracks ‘Mir’, ‘Mor’, and ‘Mer’, eventually grow to large waves, with album closer ‘Mar’ a thick, journeying song that brims with an hitherto unheard intensity before the sonic waves erupt into a distorted rush of static.

Mur is a profoundly tender work, made for close listening; the waters of its meditational, memorial stream of flowing minimalist ambient run deep.