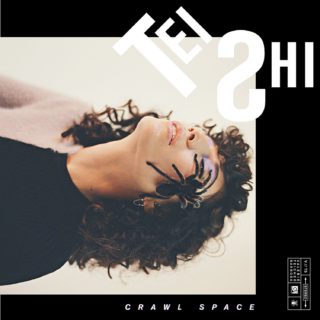 Words by Lauren Down

There is a distinct difference between a lived experience and borrowed one. On Tei Shi’s debut album, ‘Crawl Space’, the differences play out subtly but it’s clear the Buenos Aires-born artist has lived every minute of it.

You can hear it in the narrative, one that is almost too specific to be universal. You can hear it in her voice, those gossamer vocals reaching for a way out. You can, of course, hear it in the home recording that introduces the album – one made by Tei Shi (real name Valerie Teicher) and her dad when she was 9. The sense that a part of 9-year-old Tei Shi wanted to make this album, somehow lends the whole thing power – the fulfilment of a long-time aspiration becoming almost audible.

So, what does that fulfilled aspiration sound like? It’s a slick, deeply personal, modern, record whose weighted production and even-handed tone is peppered with rare dramatic moments. Each element – from the retro smoky synths of ‘Keep Running’ and the jazz club horns of ‘Year 3K’, to the eerie psychedelic guitars of ‘How Far’ and the ridiculously futuristic, skin-shedding beats of Prince-like ‘Justify’ – is given space to breath.

Each provides a shifting foundation for Tei Shi as she speaks to the isolation and suffocation of a failing relationship, moving from self-doubt (‘Baby’) to sarcasm (‘Say You Do’) and finally to a position of power in ‘Crawl’ – a moment in the album you can actually feel Tei Shi crawling out from underneath everything and realising she deserves more. Like a relationship that should have ended a long time ago, the album drags a little at times – but like young love, is a beautiful thing ended all too soon.