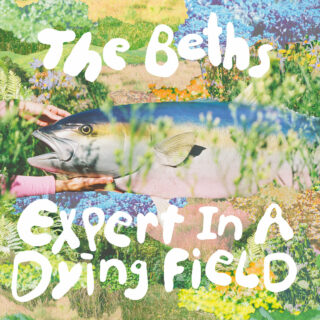 If not for the occasional oddly-timed vocal melody and musical foray exposing The Beths’ undeniable skillset, there is little to suggest the band’s formation occurred while its members were studying jazz. The Aotearoa/New Zealand quartet’s two records prior to Expert in a Dying Field (Future Me Hates Me and Jump Rope Gazers) dealt largely in scuzzy guitar tones and self-effacing, whip-smart lyrics, diarising vocalist Liz Stokes’ dealings with loneliness, relationships and overwhelming doubt.

Rarely an optimist, Stokes shows few signs of leaning into the light on the new album. The title track queries how one can disconnect from something they feel so intimately, despite it falling apart, while on ‘Change in the Weather’ she indicates a positive shift is possible (‘There’s a change in the weather, maybe things will get better”), before admitting her inability to believe it. She goes as far as to outright questions another’s want to commit on the otherwise bright and sprightly ‘I Want to Listen’, asking: “Why do you still like to try?”

Whether she is wistfully daydreaming or anxiously relaying her paranoias, Stokes’ bandmates again ably back her throughout much of Expert in a Dying Field. ‘Your Side’ is a glorious slice of plaintive pop music, the wrench of separation articulated over shining guitar lines. Elsewhere, ‘I Told You I was Afraid’ and ‘Silence is Golden’ carry the flag for their core indie/pop/punk aesthetic, capturing both the punch and bare-all honesty which form the heart of the band’s best tracks.

While others, such as ‘Best Left’, do tilt into the territory of muted, uninspiring guitar music which let Jump Rope Gazers down at times, Expert in a Dying Field nevertheless stands alone among The Beths’ discography to date. An extension on all that they have done previously, it reiterates that the band are more promising, and worthwhile, than they at times seem to believe themselves.