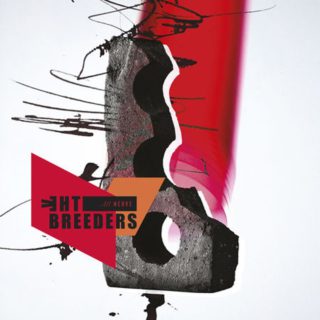 Patience has become a prerequisite quality in Breeders fans. Since the Deal twins’ 1993-classic ‘Last Splash’, their shortest break between albums has been six years, and this fifth instalment now arrives a decade on from its predecessor ‘Mountain Battles’. In terms of prolificacy, The Fall they’re not, even if the Dayton, Ohio, outfit could once have rivalled Mark E. Smith’s project for internal dramas and revolving line-ups.

With all intoxicating substances relinquished and passive-aggressive grudges resolved, ‘All Nerve’ reunites Kim and Kelley Deal with bassist Josephine Wiggs and drummer Jim Macpherson for the first time on record since 1993’s ‘Last Splash’. Though, as ‘Nervous Mary’ erupts out of its sparse intro, it feels like only a fraction of the time has elapsed.

“Good morning!,” Kim bellows, seemingly addressing potential stragglers, before distorted power chords and sugary vocal harmonies bound in on boisterous comeback single ‘Wait In The Car’. The band succeed in dropping the pace without sacrificing momentum on the Steve Albini-produced title-track, with Kelley’s muscular guitar runs adding power to Kim’s steely declaration, “I won’t stop, I will run you down.”

Throughout, lyrics are elliptical as ever, though there’s often a sense of foreboding, most notably in Wiggs’ deadpan fever dream ‘MetaGoth’ – with lyrics cribbed from a real poem her mother wrote about her father – and ’Walking With The Killer’, which sets a story of femicide to perturbingly tranquil sonics. As a pretty straight cover of ‘Archangel’s Thunderbird’ by Krautrock pioneers Amon Düül II segues into reverb-drenched dreamscape ‘Dawn: Making An Effort’, it’s clear the quartet are creating completely unhampered by any external expectation. In essence, The Breeders are pleasing themselves first, and fans second, and to witness such spontaneity still in practice – 28 years on from their debut – makes ‘All Nerve’ worth the wait.