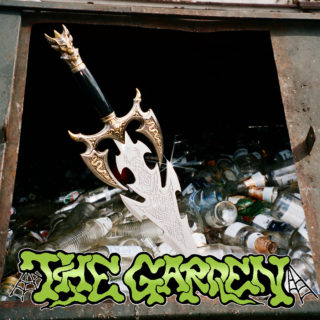 I’ve spent three weeks listening to The Garden, and I’ve come to the conclusion that the duo are to music what Nicolas Cage is to movies. Twin brothers Wyatt and Fletcher Shears may have notched up ten years of music now, but their back-catalogue is freewheelingly schizophrenic. Every time you get a moment of inspired brilliance, it’s almost instantly cancelled out by the duo doing something that leaves you thinking “what the hell?”

The band’s fourth full-length Kiss My Super Bowl Ring is a weird beast indeed. Sometimes outstanding, sometimes absolutely dire but mostly just a confusing mess, it’s an album that often feels more like a mood board of half thought-out sonic experiments than a well-structured collection of finished songs.

The best parts of this record blow by in the first ten minutes. Kicking off with the dirge-like grunge of ‘Clench To Stay Awake’ the real high points when you get to the midpoint. ‘A Fool’s Expedition’ starts off all early Dinosaur Jr before dissolving into a genuinely delightful bamboo flute solo. The following track ‘AMPM Truck’ is my personal highlight – a fidgety no-wave banger with a guitar lick that Nile Rogers would be proud of.

It’s from there, though, The Garden decide to go drum ‘n’ bass, and things go downhill rapidly. Remember Transplant, that cringe-worthy Travis Barker and Tim Armstrong collaboration of the early noughties? Well, if that taught us anything, it’s that punk, and D’n’B never sits well together. It’s like HP Sauce and vodka – both are equally good on their own merits, but you’d never want them mixed. Yet the Shears brothers attempt exactly that on ‘Hit Eject’ and the results are as laughably bad as you’d expect. Meanwhile, ‘Lurkin’, the band’s ham-fisted go at doing a trap is only redeemed when Khalif Jones (aka Le1f) takes over halfway through.

Put simply, Kiss My Super Bowl Ring is a horrible mess, but like all eyesores, something about it means you can’t turn away. Think of this as a monument to those times when blind ambition trumped reason. You know, the moments when rather than ask if they could, the people involved should’ve probably wondered if they should.

Emma Ruth Rundle & Thou have made a game-changing new record