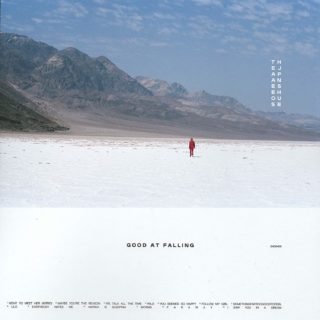 It’ll be with some surprise that a lot of people register that this is Amber Bain’s debut album. It feels as if she’s been around forever, not least because her position as part of the Dirty Hit stable has afforded her no end of coverage and constant live exposure, with support slots to similarly zeitgeisty label mates like Wolf Alice and her de facto mentors, The 1975. It’s also down to the fact that, like Matty Healy’s outfit, she’s put out four EPs over the course of three years in the build-up to this first full-length – just as The 1975 made a point of establishing a firm following in the run-up to releasing their self-titled LP, so has Bain been drip-feeding material ever since 2015’s ‘Pools to Bathe In’.

Unlike ‘The 1975’, ‘Good at Falling’ is not likely to top the album chart, but the creative effect of the slow and steady gestation period is striking in its similarity: Bain sounds assured as she delivers a cohesive, smartly thought-out collection of pop songs, and doesn’t shy away from flirting with experimentation either. The one constant is her voice, which is well-suited to electronic backdrops that she clearly has the measure of. On the likes of ‘You Looked So Happy’ and ‘somethingfartoogoodtofeel’, she channels Imogen Heap in shifting her vocals to match the mercurial sonic landscape, while the tracks that lean heavily on autotune – ‘Everybody Hates Me’, ‘Wild’ – do so without displacing Bain’s position front and centre.

The instrumental palette is consistently minimalist. More or less every song is built around beds of synth sprinkled neatly with effects, very much a design in the image of George Daniel of The 1975, who played a key part in fleshing out Bain’s demos. Accordingly, by the time the sprawling, thirteen-track effort is reaching its close, it starts to sound like a little bit much of a muchness, especially when Bain doesn’t lyrically have a great deal to talk about beyond her own personal tribulations. ‘Good at Falling’, though, bodes well for her future, and provides further stirring evidence that, when it comes to debut records, slow and steady usually wins the race.