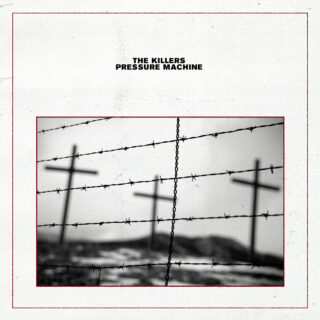 I’m about halfway through my third listen before my girlfriend sticks her head around the door and asks, “Who are you listening to?”

“The Killers,” I reply, trying my best not to look too sheepish.

I feel like she speaks for a lot of the British public regarding the Las Vegas rockers. They might be coming up to their 20th anniversary as a band, but for many, the relationship starts and ends in the summer of 2003, when, for one brief moment, they were the hottest shit in town, beloved by Zane Lowe and played in every student flat, Topman shop and belted out on the dancefloor of Scream pubs. Ever since then, the band’s popular legacy has been more of an afterglow than anything – a curious footnote to an era when the ’80s-infused indie rock ruled the roost. However, somehow they’ve endured, and thanks to the first verse and chorus of ‘Mr Brightside’, they’ve taken their place as a kind of national wedding band.

In our minds, The Killers might be stuck in the early ’00s, but in reality, they’ve actually been plugging away relentlessly. Like an indie rock version of Leeds United, they’ve lurked beneath the surface like a sleeping giant. They may not have bothered the charts or any annual best-of lists in the past two decades, but they still manage to headline festivals and sell out Wembley Arena. In fact, an emphasis on live performance has also shaped the band’s evolution. Over the years, Killers frontman Brandon Flowers has transmogrified from skinny tie-wearing scenester to a sequined-jacket sporting, keyboard plonking hybrid of Elton John and Elvis Presley. Their music has also moved inexorably towards slightly absurd yet undeniably bombastic anthems about hopeful romantics and young dreamers. Just look at last year’s Imploding the Mirage – 11 straight tracks of pompous, stadium-filling rock that was half Scissor Sisters and half Born To Run-era Springsteen.

That being said, Pressure Machine is something of a U-turn in a career spent churning out stadium bangers. A concept album written while the band were in COVID limbo, it’s a rough pen-portrait of Flowers’ home town of Nephi, Utah, a sleepy place of around 5,300 people in the shadow of the state’s West Hills. With each song beginning with testimony from one of the town residents, the record is more of a series of small vignettes showing us around a small community struggling through the opioid epidemic and striving to stay relevant in a world rushing by. It’s a place where “…good people lean on Jesus and are quick to forgive”, as Flowers sings on ‘Quiet Town’, before going on to describe a town ravaged by suicide, addiction and depression.

Such heavy subject matter is backed up by some serious-sounding music. While there’s no denying that the band’s typical pop hooks are still in there, everything on Pressure Machine is decidedly more downbeat than what you’d find on other Killer’ records. The triumphant synths are replaced by lonesome harmonica. ‘In the Car Outside’ is about as close as the band get to a new ‘Somebody Told Me’, but even that, a chugging slice of rhinestone synth-pop, is all minor key and haunting lap guitar. Deep down, though, this is still The Killers following in the footsteps of Springsteen. With its portraits of working people set to pastoral-sounding rock, this is the band’s stab at The River – with more keyboards and a lot less saxophone.

All told, I’m deeply ambivalent about Pressure Machine. On the one hand, I have to respect Flowers’ songwriting talent. He definitely knows how to inhabit a character and can wail them out like the best of them. However, as a piece of blue-collar rock, I can’t help but feel that this record has a whiff of David Cameron’s Hug-A-Hoodie rhetoric about it. No doubt it’s well-meaning – it’s sympathetic to its characters and does an excellent job of showing you how they live. But when it comes time to talk about the complex factors that trap people in these situations, it just slaps them on the back and says “it’ll be OK”. “When the mountain comes back to life, it doesn’t come from without, it comes from within,” Flowers sings on ‘Sleepwalker’, revealing a worldview where bad things happen to good people just because they can, as if entirely by chance. I’m just not sure how much I buy that.